Indian Trails and Towns in Ohio 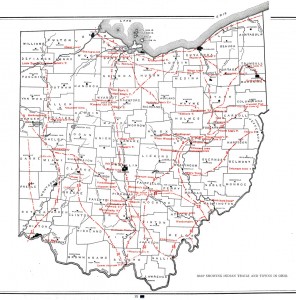 The importance of the aboriginal trails of Ohio to the settlement and development of the state hardly can be overestimated. In many instances they determined the location of the early white settlements as well as the first forts and military roads, many of them later becoming permanent highways. They ranged in width from a mere trail threading the wilderness to paths of a few feet wide in the more open country and generally followed the high ground between the water courses or hills and ridges adjacent to the streams.

It was along these trails that the aboriginal Ohio peoples traveled from one part of the state to another, whether engaged in warfare, the chase, trade and barter, or migration. Later they served, together with navigable streams, as the only means of entrance for the white traders and settlers who pushed their way into the country west and north of the Ohio River. Thus the trails in great measure determined the course of improved highways and in this way strongly influenced the location of communities and towns.

Trail No. 1 – The “Great Trail”, was the most important east and west trails in Ohio. It was the western extension of the “great highway” between the Indian country around the Delaware and Chesapeake bays, running westward to the forks of the Ohio River, where Pittsburgh is now. thence westward through Ohio to Sandusky Bay and around the west end of Lake Erie to a junction with the trails leading to the country around Lake St. Clair. The principal Indian towns on the Great Trail in Ohio were the Tuscarawas and Beaver towns where it crossed the Tuscarawas river; Mohican John’s town, further west; and the Sandusky towns around Sandusky bay and river. At a later period, the Great Trail was the highway connecting Fort Pitt, at the forks of the Ohio; Fort Laurens, located at the crossing of the trail and the Tuscarawas river: Fort Sandusky on Sandusky bay. and Fort Detroit, at Detroit.

Trail No. 2 – Of striking importance was the Scioto running north and south through the state, between Sandusky bay and the mouth of the Scioto River. Ascending the Sandusky River, crossing the portage and descending the Scioto to its juncture with the Ohio, the Scioto trail crossed the latter river and joined the famous “Warriors’ Path,” leading far into the southland. Together these trails constituted one of the greatest war paths of the western country. The principal towns were the Sandusky towns near the bay; the Pipe’s towns, Half King’s town, Wyandot town, in the vicinity of the upper rapids of the Sandusky river; Mingo and Delaware towns in Delaware county: Old Salt lick town and Mingo town in Franklin county; Maguck and the Chillicothe towns in Pickaway and Ross; Hurrican Tom’s town and Wanduchale’s town further south and Chillicothe on the Ohio, or Lower Shawnee town, at the mouth of the Scioto. The northern portion of this trail was identical with the route of Trail No. 6.

Trail No. 3 – Tins trail connected the Indian country about the forks of the Muskingum with the Shawnee settlements on the Scioto and thence west and north to the important Miami towns on the Miamis and the upper course of the Maumee River. At the Muskingum forks it connected with important trails running east and north. The principal towns were Conchake, White Woman’s, Wakatomika, French Margeret’s, Maguck, Cornstalk’s, Upper Chillicothe and Pickawillany.

Trail No. 4 – frequently known as the Shore Trail, followed the southern shore of Lake Erie, from where Erie, Penn., now stands westward along Sandusky bay and then joined the trail north to the site of Detroit. Pettquotting town and the towns around Sandusky Bay were touched by this trail.

Trail No. 6 – was one of the most Important fur routes between the Lakes and the Virginia country, It entered Ohio opposite the mouth of the Great Kanawha river, passed through the salt region of Jackson County to a Juncture with trail No. 2 at Maguck, from which point north the two trails were practically merged. With its southern extension through the mountains this trail formed one of the greatest highways between the southern and the central Ohio counties.

Trail No. 7 – known as the old Mahoning trail entered Ohio where the Mahoning River crosses the state line. Eastward it joined the Great Trail to the forks of the Ohio. Its westward course led through Portage and Summit counties to Sandusky Bay. The principal towns were SaltLick and Mahoning towns on the Mahoning.

Trail No. 8 – connected trail No. 3 with the Maumee River, at the mouth of the Auglaize thus forming a land-water route to Lake Erie. The old town of Wapogkonetta and Little Turtle’s and Blue Jacket’s town were on this trail.

Trail No. 9 – extended from Will’s town on the Muskingum to Crow’s town on the Ohio near the present city of Steubenville. This trail, as well as trails 1 and 2 were extensively used by the first whites who pushed their way into the country north and west of the Ohio.

Trail No. 10 – connects Chillicothe on the Ohio with Trail No. 3 midway between Mad River and Pickawillany. It follows in a general way the watershed between Paint Creek and the Little Miami River.

Trail No. 11 – entered Ohio from the south, crossing the river west of the site of Cincinnati. It followed the course of the Miami river northward and joined Trail No. 3 at Pickawillany.

Trail No. 12 – was a branch from the Great Trail, leaving that trail at Painted Post in Columbian county and extending southward to a juncture with Trail No. 5 near Conchake. The principal towns were Three Leg’s town, New Comer’s town and White Eyes town.

Trail No. 13 – extended from Maguck southeast to the Muskingum River thence southward, crossing the Ohio River in Washington county. This was a well-known war trail from the Shawnee settlements on the Scioto to the Indian settlements in southwestern Pennsylvania.

Trail No. 14 – extended from a juncture with Trail No. 11 northward through the western tier of counties to the headwaters of the Wabash. Its course led near the present towns of Eaton and Hamilton.

Trail No. 15 – connected the towns at the mouth of the Scioto with Trail No. 3 near French Margaret’s town in Fairfield County. It passed through the great salt region of Salt Creek and Jackson County and doubtless played an important part in the aboriginal salt industry. The principal towns were French Margaret’s town, Standing Stone town and Lower Shawnee town.

Trail No. 16 – was a connecting link between Trails 5 and 6. Its course followed that of the Ohio River; usually some distance inland and the principal towns were Wanduchale’s and Kiskiminetas. A ranch led southward through Jackson county. West Virginia.

The Indian towns shown on the map, in connection with the trails, should not be confused with the village sites of the county maps, which are determined solely by the material evidences scattered through the soil, while the former are based entirely upon historic evidence. Briefly the State map aims to show in a composite manner, as nearly as possible the location of the more important aboriginal trails and Indian towns, regardless of chronology, of which there is historic record. While extending down into historic times, the trails and many of the towns doubtless reached far back into the pre-history period of the territory now within the State of Ohio and serve as a connecting link between the two eras.

From the Archaeological Atlas of Ohio 1914